Joking between Guru and disciple 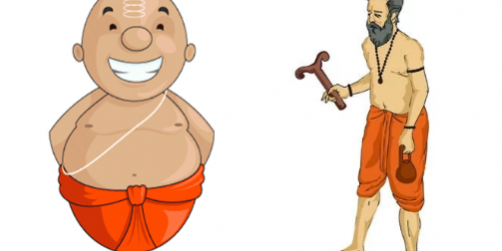 Translation: One must only involve in joking and laughing with Guru without any crookedness or evil mindedness driven by insincerity and hidden motivations to settle scores or to make fun of, etc. Similarly, a disciple involved in joy and sorrow should not be sarcastically dealt by the Guru. By such behavior of crookedness, both Guru and the disciple will live eternally in hell as long as the moon and the stars exist in the universe. (Garuda Purana, Pretkhanda, 3.10)

During association of Guru and disciple, it is inevitable that there will be amusing exchanges such as jokes and counter jokes. Sometimes the Guru might joke on a student or on a situation and sometimes a disciple might do such a thing.

But, in such joking conversations or situations, if there is insincerity, evil mindedness, dishonesty or crookedness, then such behavior on part of the disciple will certainly take the disciple to hell eternally. Similarly, if the Guru sarcastically jokes upon a student with a desire to show down upon or with a crooked motive, then the Guru shall also destined to achieve hell eternally.

Therefore, Guru disciple relationship should be completely bereft of any sort crookedness. It should be straight forward, transparent, sincere, honest and simple. One should keep one’s heart free from ill feelings against any living entity.

This does not negate there should not be any joking at all. There will be. It is natural. But, no party should use them to settle scores or to gain favour of others, etc.

In other words, one should stride very carefully in this relationship which should be strictly guided and directed for the eternal emancipation of the soul. As Narada Muni says, “sannikarso martyanam anadara karanam” – i.e., when two mortals come together, it is inevitable that familiarity breeds contempt. Guru and disciple relationship is no new to such things. We see this happening in the history. But carefulness is required not to go too close to the Guru and vice versa. Respectable distance and space has to be maintained. This is the purport of this verse from Garuda Purana, Pretakhanda, 3rd chapter, 10th sloka. Hare Krsna.