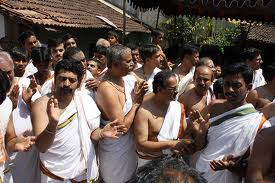 There are about 5 Indian villages where Sanskrit is spoken as everyday language!

Residents of these villages reportedly speak the language during every kind of communication, ranging from holding serious discussions to buying goods from grocery stores to having casual chats with friends.

Prem Narayan Chauhan pats his oxen, pushing them to go a little faster. Ziighrataram, ziighrataram chalanti, he urges them. The animals respond to their master’s call, picking up pace on the muddy path that leads to his 10-acre cornfield. Chauhan, 35, dropped out of school early, after Class II. He does not consider it remarkable that he speaks what is considered a dying language (or that his oxen respond to it). For him, Sanskrit is not a devabhasha, the language of the gods, but one rooted in the commonplace, in the ebb and flow of everyday life in Jhiri, the remote hamlet in Madhya Pradesh, where he lives.

Mutterings under banyan trees, chit-chat in verandahs, pleasantries on village paths, disputes in the panchayat — in Jhiri, it’s all in Sanskrit.

And then, a cellphone rings.

The moment of contemporary reality is fleeting. Anachronism and Amar Chitra Katha take over as the conversation begins: “Namo, namah. Tvam kutra asi?” (Greetings. Where are you?)

Jhiri is India’s own Jurassic Park. A lost world that has been recreated carefully and painstakingly, but lives a precarious existence, cut off from the compelling realities of the world outside.

The 1,000-odd residents of this hamlet, 150 km north of Indore, hardly speak the local dialect, Malwi, any longer. Ten years have been enough for the Sanskritisation of life here. Minus the Brahminical pride historically associated with the language —  Jhiri has just one Brahmin family.

The much-admired 24-year-old Vimla Panna who teaches Sanskrit in the local school belongs to the Oraon tribe, which is spread over Chhattisgarh and Jharkhand. And the village is an eclectic mix of Kshatriyas, Thakurs, Sondhias, Sutars and the tribal Bhils.

Panna has been key in popularising Sanskrit with the women of Jhiri. With mothers speaking the language, the children naturally follow.

Take 16-year-old unlettered Seema Chauhan. She speaks Sanskrit as fluently as Panna, who studied the language for seven years for her Master’s degree.

Chauhan is a livewire, humouring and abusing the village girls in Sanskrit. “I just listened to Vimla didi,” she says. “In fact, I’m often at a loss for words in Malwi.” Just married to a man from a neighbouring village, she says confidently, “My children will speak in Sanskrit because I will talk to them in it.”

As eight-year-old Pinky Chauhan joins us, she greets me politely: “Namo namaha. Bhavaan kim karoti?” (What brings you here?) Her father Chander Singh Chauhan laughs and says, “My wife started speaking to me in this language, so I learnt it to figure out what she was saying behind my back.”

Mukesh Jain, CEO, Janpad Panchayat, Sarangpur tehsil (which includes Jhiri), recalls, “I could not believe it when I first came here. It can get difficult during official interactions, but we encourage them.”

All kinds of logistical problems crop up in Jhiri. This year, 250 students did their school-leaving exams in Sanskrit. “A Sanskrit teacher had to work along with all the examiners of other subjects,” says Jain.

But there are some positive offshoots too. Thanks to Sanskrit, Jhiri has re-discovered some lost technologies of irrigation, conservation and agriculture from the old scriptures. A siphon system of water recharging, for instance, resulted in uninterrupted water supply through the year in the fields. Small check-dams, wells and irrigation facilities followed.

“It is matter of pride for us to retrieve these old techniques from the scriptures. With no help from the government and without using any artificial systems, we’ve reaped great benefits,” says Uday Singh Chauhan, president of the Vidya Gram Vikash Samity, which runs development programmes in the village.

But Jhiri’s pride stops at Sanskrit. The first doctor, engineer, economist, scientist or linguist is yet to walk out from it. After finishing school, most village youth join a political party.

Electricity is a matter of luxury, so is sanitation. Even the school does not have a toilet, which is the single biggest reason for girls dropping out at the senior secondary level. The average age of marriage for women is 14. Even Panna, who was thinking of doing her PhD, had to give in to the wishes of the wise men of Jhiri who got her married to the other schoolteacher, Balaprasad Tiwari.

There is no public transport; an Internet connection is unimaginable. Jhiri desperately needs to connect to the rest of the world, to explore its infinite possibilities, to grow.

But Jhiri is still a success story, especially when you consider that a similar experiment, started a couple of decades ago in Muttur village of Karnataka’s Shimoga district, failed, because of the caste factor — it remained caged with Brahmin  patrons.

“About 80 per cent people of the village are Brahmins who know Sanskrit but won’t speak it. This is because the carpenters and blacksmiths would not respond to it,” says Dr Mathur Krishnaswami, head of the Bharatiya Vidya Bhavan, Bangalore, who was involved with the movement.

“No language in the world can survive until the common man starts speaking it,” he points out.